Information about the Cat Crazy Villagers

Check out meeting dates on the Home Page or Calendar.

Contact someone on the POC page to answer questions.

Click on and print the Membership Form link above and bring it to the next meeting.

Lee and Barbara Brockman arrived in The Villages in the Fall of 2012 with 3 Ragdoll cats who had played a major role in their lives. Their cats had been "celebrities" of sorts in their hometown of Charleston, SC, making public appearances which included being mascots for a local Country Clubs' swim team.

The abundance of Lifestyle Clubs here in The Villages gave them the idea to start a Club devoted to the Ragdoll breed. When it became clear that the majority of those interested in the Club were not Ragdoll owners, the Brockman's shifted course and opened the new Cat Crazy Villagers Club to owners of all breeds.

The Club officially began in January of 2016 and was dedicated to the health, education and welfare of cats and their owners. The first official meeting was held in February of that year with Bill Gottschalk from the Humane Society/SPCA of Sumter County being the Guest Speaker.

The initial areas of interest included TNR, Fostering and Cat Shows. As the Club evolved it was evident that it would be a "working" Club that had the ability to make a profound impact in the Cat Community of Central Florida. Currently it has a robust agenda which includes Fundraising, Community Outreach, Lost and Found Cats, Adoption/Rehoming, TNR, Member Outreach as well as a Social Committee. In three short years the Club  has raised well over $10,000 for cat charities, reunited numerous lost cats with their owners, placed some 50 cats in forever homes and has collected over a ton of cat food for needy families. 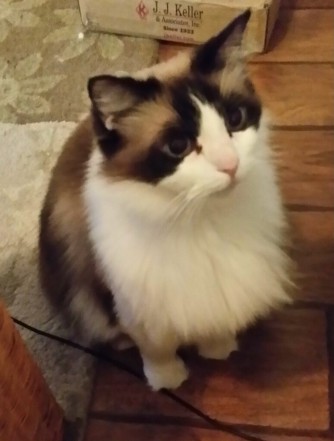 Sasha Obituary     Tellico Village, Tennessee. “Wallydolls Princess Sasha”, offspring of “Wallydolls Princess Kelly” and “Lonerock’s Frosted Tigger”, beloved family member of Lee and Barbara Brockman, crossed the Rainbow Bridge Tuesday, April 14th, 2020. “Sasha” was born on March 31st, 2003 in Sunburg, Minnesota and was acquired by Barbara Boquist of Maple Grove, Minnesota that summer. She later moved to Richmond, Virginia and was adopted by the Brockman’s of Charleston, SC on Thanksgiving Day of 2008. That timing was appropriate as Lee and Barbara were so thankful for Sasha and the 12 years they were to spend together. Her reticent personality fit well in sharing a home with her new brother, the magnanimous Ragdoll “Chancey” Brockman. She served as the ever-faithful wingman to Chancey for the next 9 years as they barnstormed the public appearance circuit which brought smiles to young and old alike, not to mention raising thousands of dollars for cats in need. Two of the biggest milestones in Sasha’s life were being named an “Official Mascot” of the Country Club of Charleston Swim Team in 2009 and an extended tour of Europe that she shared with Chancey and her parents. The red beret she acquired in Paris became her signature accessory, although she doffed it before taking her daily training swim in the Seine. In 2015 Sasha packed her catnip and headed for The Villages, Florida where she served as a backup to Chancey for public appearances. In 2017 that changed abruptly as Chancey’s health issues thrust Sasha into the lead role as the Ambassador for the “Cat Crazy Villagers” Club. Under his tutelage she becamecomfortable in navigating the Squares and the evening’s donations often matched those that came at the paws of her mentor. Spanish Springs became her favorite, not for the ambiance, but rather the long golf cart ride which she relished! In 2019 Sasha decided to follow the Brockman’s north to the Smoky Mountains of Tennessee. There she spent the remainder of her life sharing the front deck with her brother Chancey, waiting for him to bring in that long-promised trout from the Little Tennessee River- a catch they would no doubt share, as they had many experiences and memories, with their “furever friend”. “Sasha” Brockman was predeceased by her brother Chancey(4-9-20) and is survived by her loving parents, Lee and Barbara, her sister Anastasia(5yrs) and her extended family of “Cat Crazy Villagers” - those she loved dearly and always will, “more than tongue can tell”. Memorials can be made to the “CCC UF Scholarship” by going to: www.uff.edu/giving-opportunities/022529-cat-crazy-villagers-scholarship> 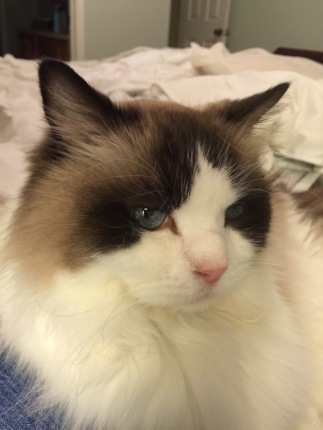 ChanceyObituary    April 9, 2020; Tellico Village, Tennessee. “Piedpippur Chancellor of Ridgecreek”, aka “Chancey”, offspring of “Dollchateau Marzipan of Piedpipurr” and “Regional Winner, Supreme Grand Champion Dreamdolls Mr. Pickwick”, and beloved family member of Lee and Barbara Brockman, crossed the “Rainbow Bridge” today, his 18th birthday. “Chancey” was born April 9, 2002 in Mt. Holly, New Jersey to Carole Piper’s Piedpippur Ragdolls and was then acquired in July of that year by Mary Heath, proprietor of Ridgecreek Ragdolls in Martinez, Georgia. He served as the male breeder cat at Ridgecreek until May 2008, when he was adopted by the Brockman’s of Charleston, SC. Despite his refined pedigree, Chancey always considered himself a “blue collar cat” who was just as comfortable around strays, alley cats and ferals as he was his litter mates. Although no prima donna, he was very “comfortable in his own coat”. With his “larger than life” personality he became a fixture at the Charleston Farmer’s Market and was in great demand for appearances at birthdays, graduations, shopping center openings, Easter egg hunts and bar mitzvahs. In May of 2009 Chancey and sister Sasha were named official mascots of the Country Club of Charleston Swim Team, a post that they held until July of 2011. Having a personal photographer and being featured on the front page of all team literature filled the duo with pride. Rubbing the Ragdoll’s (enlarged)heads before taking the starting blocks was a point of inspiration for the Country Club swimmers and a source of intimidation for the opposition. They loved every minute of it.2015 brought change as Chancey packed his litter box and headed for The Villages, Florida in what was to become the most impactful time of his illustrious life. Longing to be “among his people” he cajoled Lee and Barbara to take him out to the squares regularly. Chancey thoroughly enjoyed signing his paw print for the masses but his favorite part of those evenings was listening to Cat Steven’s covers and his personal favorite- Ted Nugent’s “Cat Scratch Fever”. Life at The Villages was good but in the Fall of that year it was obvious to Chancey that there “were bigger fish to fry”. After a late night involving copious amounts of catnip, he made it clear to his dad that cats were not getting their just due at TV. That soon changed as Chancey served as the inspiration for the inception of the “Cat Crazy Villagers” Club which began officially in January of 2016. He continued serving in an Ambassador’s role for the Club with appearances at Bingo Fundraisers, Publix ticket sales and, of course, the Town Squares where he relished his time at the Fundraising table with all of the ladies. Unfortunately in December of ‘16 Chancey suffered a serious fall which left him partially paralyzed. Sessions with Holistic Vet Dr. Shauna Cantwell gave him back some mobility but he had to curtail his rigorous appearance schedule. In the Summer of 2017 Chancey was dealt another tough hand as he was diagnosed with intestinal lymphoma. Ever the trooper, he vowed to beat it and secured the services of esteemed Veterinarian and UF Graduate Dr. Candice Vance of Mulberry Clinic. That collaboration led to a renewed commitment to the “CCV UF Scholarship Fund” and became a “cause celebre” to Chancey forthe remainder of his life. After much soul searching by Chancey’s team, it was determined that his days as a public persona were over. Ever the team player, Chancey reinvented himself to become a mentor to younger sisters Sasha and Anastasia in the art of public appearances. Progress came quickly at the hands of the master, although it was obvious that he was disappointed that the siblings never “owned” the craft as he had. 2018 was a year to regain some mobility as Chancey began an arduous training regimen utilizing a pet wheelchair that the Club had provided him. Improvement was such that he threatened to get back into the public sphere! Although he was never serious, it served as a wake up call to his sisters who had come to enjoy their outings on behalf of the Club. They raised their games from that day forward which was Chancey’s intent all along. Clever as a cat! 2019 saw Chancey and family relocate to the Smoky Mountains of Tennessee. There he lived out the autumn of his life on the front deck of Maison Brockman, overlooking the Little Tennessee River and dreaming of catching just one more trout. Because he could. Chancellor “Chancey” Brockman is survived by his ever loving parents Lee and Barbara, his sisters Sasha(17yrs) and Anastasia(5yrs), and his extended family of “Cat Crazy Villagers”.Those that he loved dearly and always will, “more than tongue can tell”.Memorials can be made to the “Cat Crazy Villagers UF Scholarship” by going to: www.uff.ufl.edu/giving-opportunities/022529-cat-crazy-villagers-scholarship